Burst into internal strength before the games

Saigon Beer is leading brand name in Vietnam beer industry with about 140 years of developing. Saigon Beer is recognized as National Brand and also honored to be the 351st member in Berlin Beer Academy – one of the cradle of global beer culture.

No one know this started from when but the name "Sai Gon Nguyen Chi Thanh" already became as familiar as the way we often call our relatives’ names. BSG NCT factory at first was a little and an old French workshop since 1875 belonged to BGI Brewery. After the revolution of Southern Vietnam, the factory was managed by the Southern Brewery Company and renamed itself as BSG Factory in 1977 and then officially named as Saigon Beer Company in 1993.

One of the initial things that create the speciality of this factory is its prime location. SG - NCT Brewery is one of the very few factories located in the heart of Saigon ancient city which has been existing until now when Saigon becomes a bustling Ho Chi Minh City, the most modern city in this country. If you walk around the city center, it is easy to find out the French colonial architectures; however, the architecture of a factory is not many, and BSG NCT factory is one of the rare vestiges. From the outside, the factory still retains its own ancient architecture style on walls, gates, reliefs, door frames, handrails made by bronze etc. which are all designed sophisticatedly and handled durably.

There is an interesting thing that after many changes year-by-year the gate of Saigon Beer Company has been still being maintained and utilized until today - like a symbol of the factory particularly and as a historical witness of Saigon Beer generally – it is like the illustration of Ben Thanh market at the ancient and modern Saigon! Behind that door, on that land, those are value factors that built up the strong foundation for Saigon Beer. Gradually, from that place, the Saigon Beer’s products day-by-day have been formed and touched the heart of consumers gently, elegantly but also firmly like its own name. 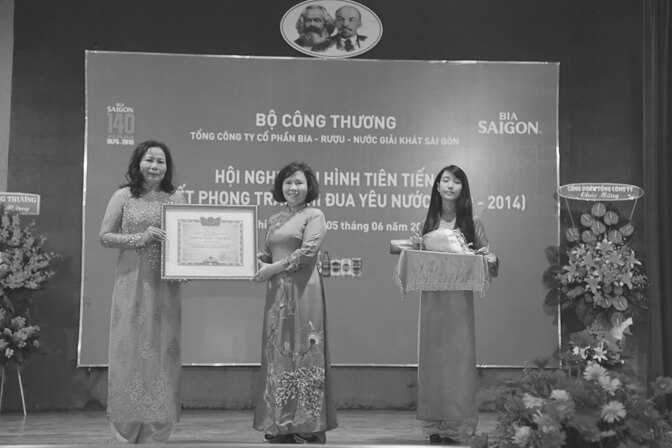 Initially, from the old rudimentary machinery system, in order to keep up with the overall development, the factory has continually upgraded classical equipment and replaced with new leading technology equipment. At present, most of the stages in the production process from input to output have been fully modernized, fully automated, meeting strict quality, AT-VSTP and environmental requirements. Beside the historical status at Sai Gon, Nguyen Chi Thanh Brewery has no wastewater treatment system, but the Corporation is determined to invest in the construction of a wastewater treatment system with a capacity of 1,200 m3 / day then completed and put into operation in 2010, increased the capacity to 2000 m3 / day by 2014, ensuring 100% of wastewater treated standard before being discharged into the environment. In addition, the factory has also made efforts to renovate the landscape of the environment, green plant.

These efforts have been recognized by the awards of environmental awards such as: Top 10 Excellent Green Sustainable Businesses in 2014, Environmental Award in Ho Chi Minh City 2014,  Certification of pioneering technology innovation and sustainable green economy in 2016. Every year, the environmental inspection delegations of the city and localities highly appreciate the environmental performance of the plant. Sai Gon - Nguyen Chi Thanh Beer Factory is proud to be the first place to trained the experienced staffs and employees of Sai Gon Beer. Coming to the factory, we will see generations of laborers working together and devoting their whole lives .. who come before the guidance, support and fire the followers as a repayment for their own Received at the beginning of the BSG, and so on, the spiraling circle grew ever larger in the trajectory of human values, creating the beauty of BSG culture. Over time, experiences are promoted and transferred to the next generations, are built and further developed through intensive and advanced training to form an energetic young generation. And sufficiently equipped with knowledge, willing to take on the assigned tasks. Modern technology equipment based on an ancient architecture has made a BSG NCT plant with its own characteristics. The equipment of the early days that make up the BSG brand has been carefully selected and respected in the Factory's Tradition as part of its history of origin, Proud of the past when coming to the factory, immersed in memories when entering the Traditional House!

Under the close supervision and guidance of the factory management, the care of the physical and spiritual life of workers is well organized by the factory unions. In addition, the activities of the Youth Union are also abundant and diversified, contributing to the youth's enthusiasm for the Factory. Many workers - from those who have been attached for many years to the young people have the same feelings when they shared feelings with the factory "Do not know ever since the name Saigon Beer Nguyen Chi Thanh was too Familiar with us, familiar as we call the names of relatives, close as the house itself. A true second home, where we can find colleagues as our loved ones, where we can rest assuredly work, dedicate, apply the knowledge we have been trained to Experience, to immerse yourself in the endless flow of Sai Gon Beer. "